Placer County Transportation Planning Agency (PCTPA), along with Caltrans District 3, Federal Highway Administration (FHWA), the cities of Lincoln, Rocklin, Roseville, and the County of Placer, are project partners for the I-80/SR 65 Interchange Improvements Project. The interchange sits at a major crossroads for Placer County, and the increasing congestion and backups at this facility have negative impacts for our mobility, goods movement, economic development, and quality of life. For these reasons, the improvement to this interchange is a top priority project for PCTPA. 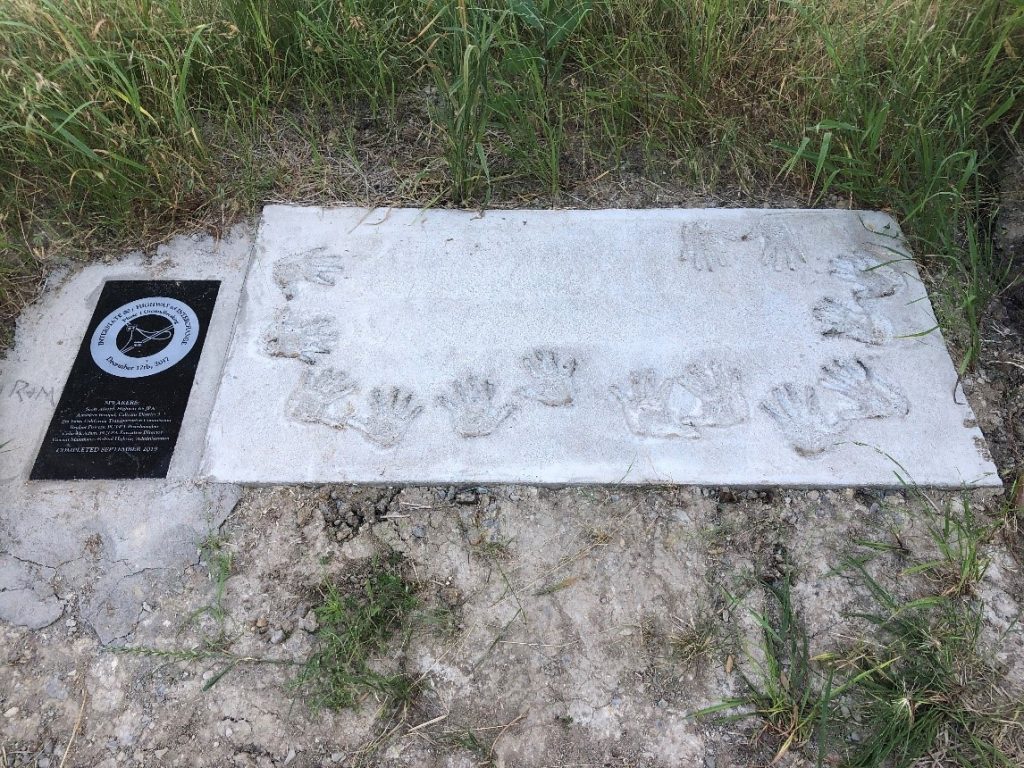 Both federal and state environmental approvals were secured in September 2016, which included Phases 1, 2, and 3. The Phase 1 improvements included adding a third lane on northbound Highway 65 from Interstate 80 to Pleasant Grove Boulevard and adding improvements to the Galleria Boulevard/Stanford Ranch Road interchange. The $50 million to fully fund the Phase 1 project was secured in August 2017 and construction began on April 30, 2018. The hand stamp concrete from the groundbreaking on December 17, 2017, was placed next to the Antelope Creek Trail under Highway 65 (see photo to right). A construction completion ribbon cutting for Phase 1 was held on Thursday, September 5, 2019. 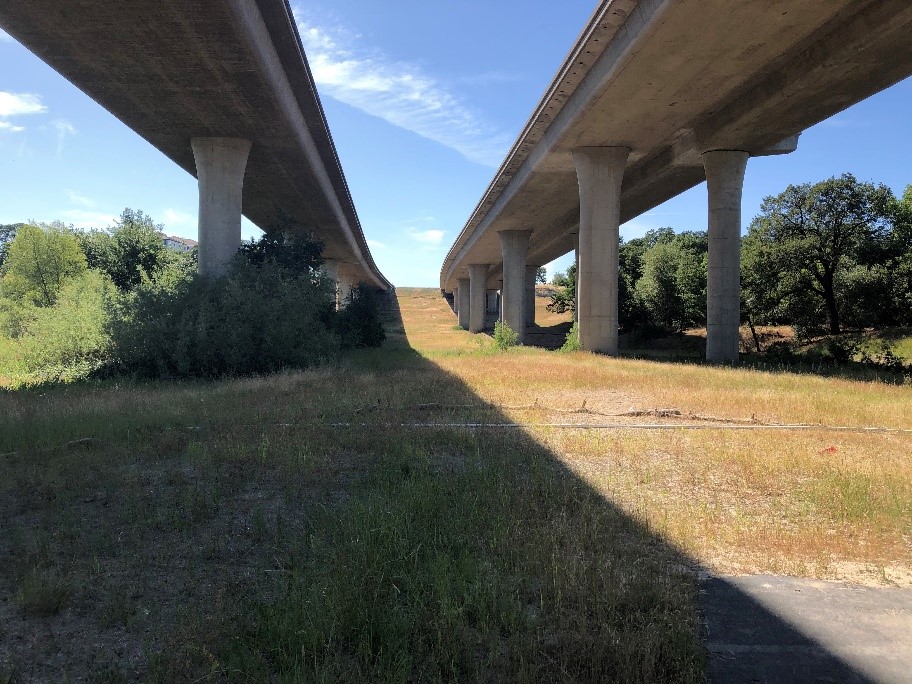 The Phase 1 project construction was delivered 4 months ahead of schedule, and the project was completed under the $50 million budget. The photo to the left shows the widened structure under Highway 65 looking north. The new third lane on Highway 65 from Interstate 80 to Pleasant Grove Boulevard was fully opened to traffic on Saturday, September 7, 2019.

Looking to the next steps, PCTPA lacks funding to implement design or construction of Phases 2 and 3, which have an estimated total combined cost of $580 million. Without a local source, there is a lack of matching funds to pursue state and federal funding. The exhibit below shows the proposed Phase 2 improvements, which would reconfigure the existing eastbound to northbound loop to a three-lane direct flyover. 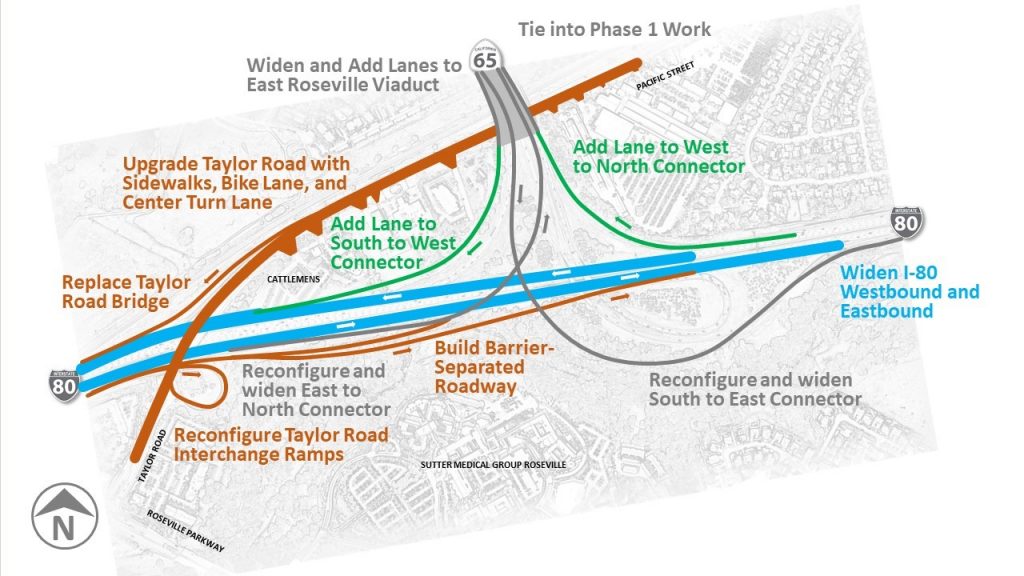 Almost every motorist in the Placer region has been stuck in traffic on or near the Interstate 80 / State Route 65 interchange.  Regardless of which direction or what time, the traffic seems to come to a complete stop near the interchange. 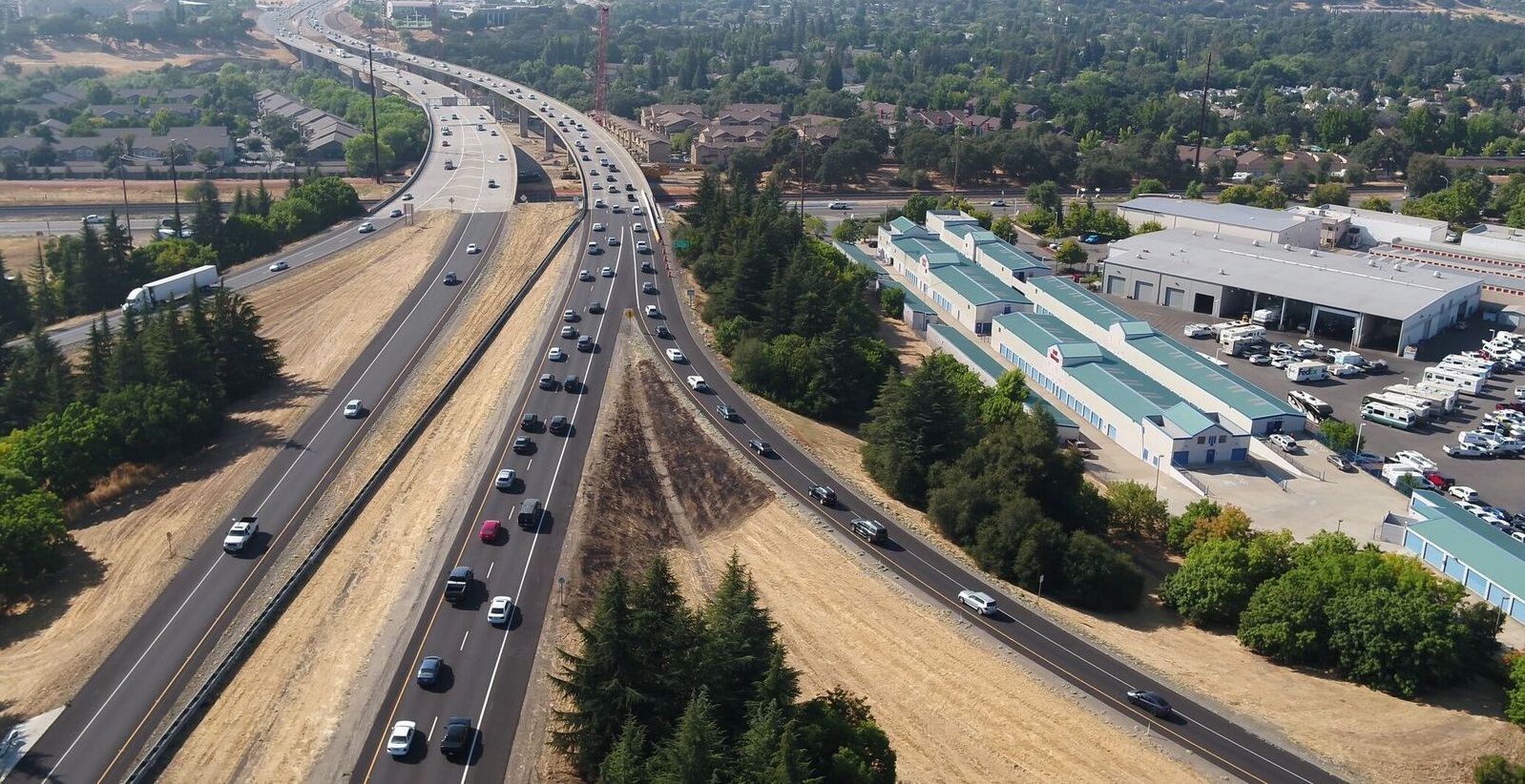 One of the reasons for this traffic congestion is because the interchange was designed and built in the mid-1980s when the County’s population was 136,000 people.  Thirty years later the population has more than tripled, therefore, the interchange needs a major upgrade and reconfiguration to accommodate the nearly 210,000 vehicles that use the interchange every day.  Such a significant undertaking will require about $450 million.  Without a local funding sales tax measure, the Placer region struggles to be competitive for federal and state funding opportunities.

However, PCTPA and its partners including the California Department of 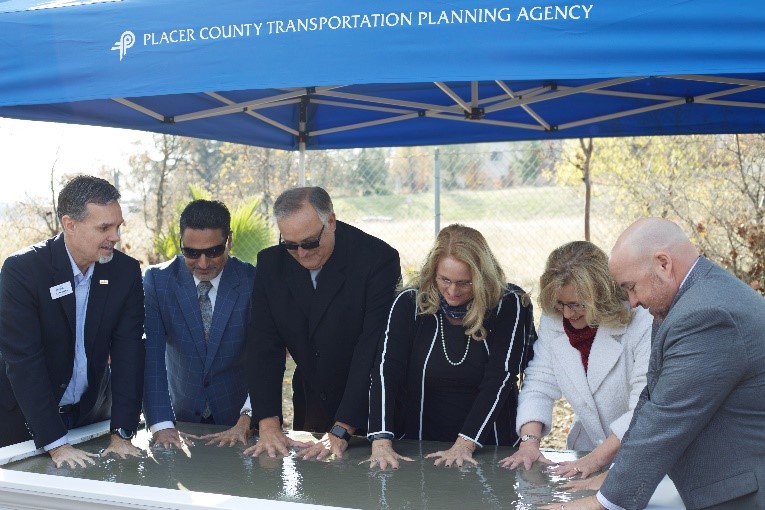 Transportation (Caltrans), the South Placer Regional Transportation Authority, Federal  Highway Administration, Placer County, and the Cities of Lincoln, Rocklin, and Roseville have created a phased approach which will allow them to move forward on fixing the problem on an incremental basis.

With Placer County growing rapidly from an influx of businesses and residents, our freeways and side streets are becoming more congested every day. Without the much needed transportation improvements, increasing traffic congestion will be inevitable.

Unfortunately, when we as residents are stuck in traffic, so are our emergency response teams. The most important job our first responders have is to get residents where they need to be safely and quickly, whether that is away from a disaster or to the hospital via ambulance during a medical emergency. Transportation improvements to South Placer County will not only benefit our first responders but also, the community as a whole.

Phase I of the I-80/State Route 65 Interchange Improvements Project has transformed one of the region’s more congested interchanges into a conduit of free-flowing traffic – for now. With more residents moving to Placer County, the roads to our schools are becoming more congested every year. Hear from our local Placer County school leaders as they discuss how the Phase II Interchange improvements will affect students of all ages throughout the County.

Hear how the region plans to keep students of all ages safe, while they travel to and from school.
Watch the latest project update video and hear from Scott Leaman, Superintendent of the Western Placer Unified School District, Dr. John Jackson, President of William Jessup University, and President/Superintendent of Sierra College in Rocklin, Willy Duncan, about the importance of continuing to improve transportation in the region.

Winter 2020 Project Update | Interstate 80 / Highway 65 Interchange ImprovementsIn September of 2019, the Federal Highway Administration, the California Transportation Commission, Caltrans District 3, PCTPA, the County of Placer, and the Cities of Rocklin, Roseville, and Lincoln, and, the Town of Loomis celebrated the completion of the first phase of the Interstate 80 / State Route 65 Interchange Improvements Project!

However, there is still more work to be done to help relieve congestion in the region and provide safer and more direct routes to our businesses, schools, and homes.

Watch this video to learn about the economic development benefits that will come with the I-80/SR 65 Interchange Improvement Project, along with a project update!

The Interstate 80 / Highway 65 interchange improvement project continues to roll along.

Construction on the first phase started in April 2018, and today, the construction crews have completed the final deck of the new lane on Highway 65.
While construction has continued on the Highway 65 viaduct structure, improvements to the Galleria Boulevard/Stanford Ranch Road interchange started again in April 2019 after being in winter suspension since last November due to rain and cold temperatures.

Improvements to the interchange will eliminate the traffic weaving as motorists exit from Highway 65 northbound and try to make their way over to turn left onto Five Star Boulevard near Costco, making it safer.

Improving the infrastructure to accommodate the increase in traffic is an important step in the right direction of creating a safer traveling experience for everyone.
Watch the video above to hear from local public safety officers who discuss their experiences travelling on the highway. Think about it…if you are stuck in traffic on Highway 65, then in all likelihood so are they! By improving the infrastructure within the I-80 and Highway 65 corridors we will be saving lives.

We’re making good progress on the Interstate 80 / Highway 65 Interchange Improvement project. While construction will continue through the holidays, businesses along Highway 65 in both Rocklin and Roseville will remain open and accessible for all your shopping needs.

Improvements to this interchange will provide local and regional travelers better access to the Galleria Mall, Scandinavian Designs, and other businesses, making shopping in the area that much more convenient. “[This project] will also be a tremendous benefit to economic development in our region and to the economy as a whole. It will allow citizens in our area to spend less time sitting in traffic and more time with their families, at their jobs, or wherever else they might like to be,” said State Assemblyman Kevin Kiley.

The local economy has already experienced a significant positive economic impact due to the construction project. More than 100 full-time construction workers are dedicated to keeping this project moving along and are at the construction site daily. This benefits our region as these workers are staying in nearby hotels, eating lunch and dinner in local restaurants, and shopping before and after work.

If you are traveling on Highway 65, you may not notice all of the construction activity that is happening on the Interstate 80 and Highway 65 interchange.

What people cannot see from above is all the construction going on below along the East Roseville Viaduct. In just the past couple months, crews have drilled twelve 13-foot wide by 100-foot deep foundation holes, which they’ve filled with rebar and concrete. These foundations will support the twelve new 60-foot high columns used to support the new third lane. Of the twelve columns needed, eight are already complete.

However, construction crews are making tremendous progress on the $50 million first phase, which will add a third lane on northbound Highway 65 from I-80 to Pleasant Grove Boulevard. As many community members may have noticed, intermittent one-way traffic control has started on Taylor Road under Highway 65. This traffic control has allowed crews to begin modifying portions of the East Roseville Viaduct to incorporate the third lane.

While Caltrans District 3 is the project owner and is managing the construction, Placer County Transportation Planning Agency (PCTPA), Placer County and the cities of Roseville, Rocklin and Lincoln were instrumental in the planning and design of the I-80/Highway 65 interchange improvement projects.

They will continue working together to acquire additional funding for the remaining $400 million in future interchange phases.“We are grateful for the partnership we have on this project with PCTPA, Placer County, the City of Roseville, the City of Rocklin and the City of Lincoln, and we continue to work together to provide the transportation infrastructure which is needed for the growing economy in Placer County,” says Caltrans District 3 Director Amarjeet Benipal.

We have reached a major milestone to reconfigure the Highway 65 interchange at Interstate 80! Construction, which began April 30, 2018, is expected to bring relief to motorists that are stuck in the back-up on Interstate 80.

This first phase will provide a third lane on northbound Highway 65 from Interstate 80 to Pleasant Grove Boulevard and improvements to the Galleria Boulevard/Stanford Ranch Road interchange.

Funding this project has been a challenge, but PCTPA and its partners garnered several funding sources to complete the
$50 million first phase. The I-80 Bottleneck project through Roseville was completed in 2011 under budget, thus, PCTPA is able to use nearly $10 million dollars from that project savings. Other local funding sources include traffic mitigation fees assessed on local developments. A full breakdown of funding sources can be found in the “What You Need to Know” section below.

The remaining $400 million cost will eventually add one lane to each of the four connectors between Highway 65 and Interstate 80. Future improvements also include maintaining the existing Interstate 80 access at Taylor Road and eliminating the weaving movements on Interstate 80 eastbound between Eureka Road and Highway 65. Unfortunately, PCTPA has maxed out the local funding sources and will need to find other local funding sources to move forward on future phases.